After Stow horse fair l headed north, through Warwickshire and Leicestershire. I stopped one night with Harry. He was brought up on the canals when the boats were still pulled by horses. They couldn't afford the best horses and used to buy the town runaways, horses that had bolted and were unsuitable to use in towns. On the towpath the horse had less options to runaway, sometimes they'd end up in the canal, but they would soon get the hang of it. Harry showed me a special halter for killing horses. There is a spike, you hit it with a hammer, quite simple. Mainly they were used on pit ponies. 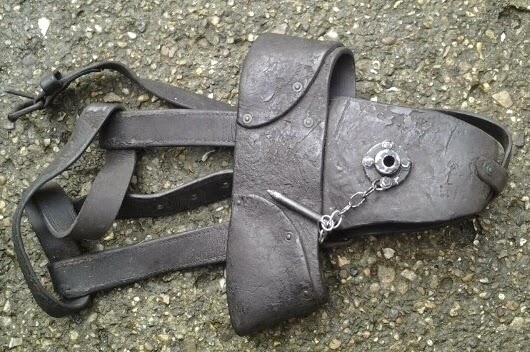 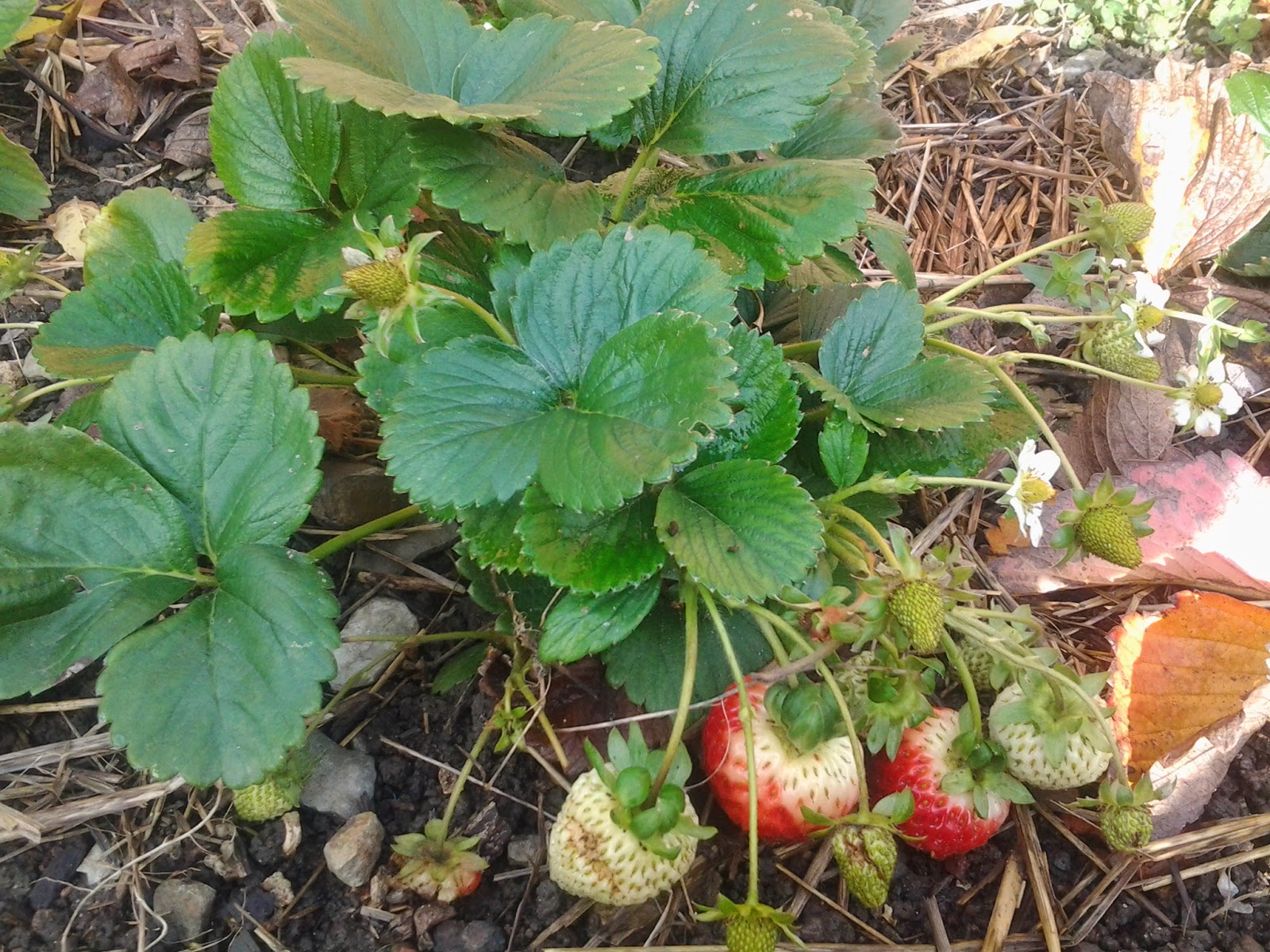 Strawberries in November
The autumn has been really mild, some people had a second crop of strawberries. I stayed with my friend Sylvia and rested a week. Sylvia thoroughly oiled my reins and reproved me for letting them get so dry and stiff. I was glad. She showed me Jack, the Jackdaw she'd rescued as a nestling, it was very tame. I tried catching American crayfish in the nearby brook, unfortunately the weather turned cold and frosty and they hibernate, l did catch one though and cooked it. We got a lift to Derby horse sale. The most pathetic horses l've ever seen at a sale. I felt depressed. 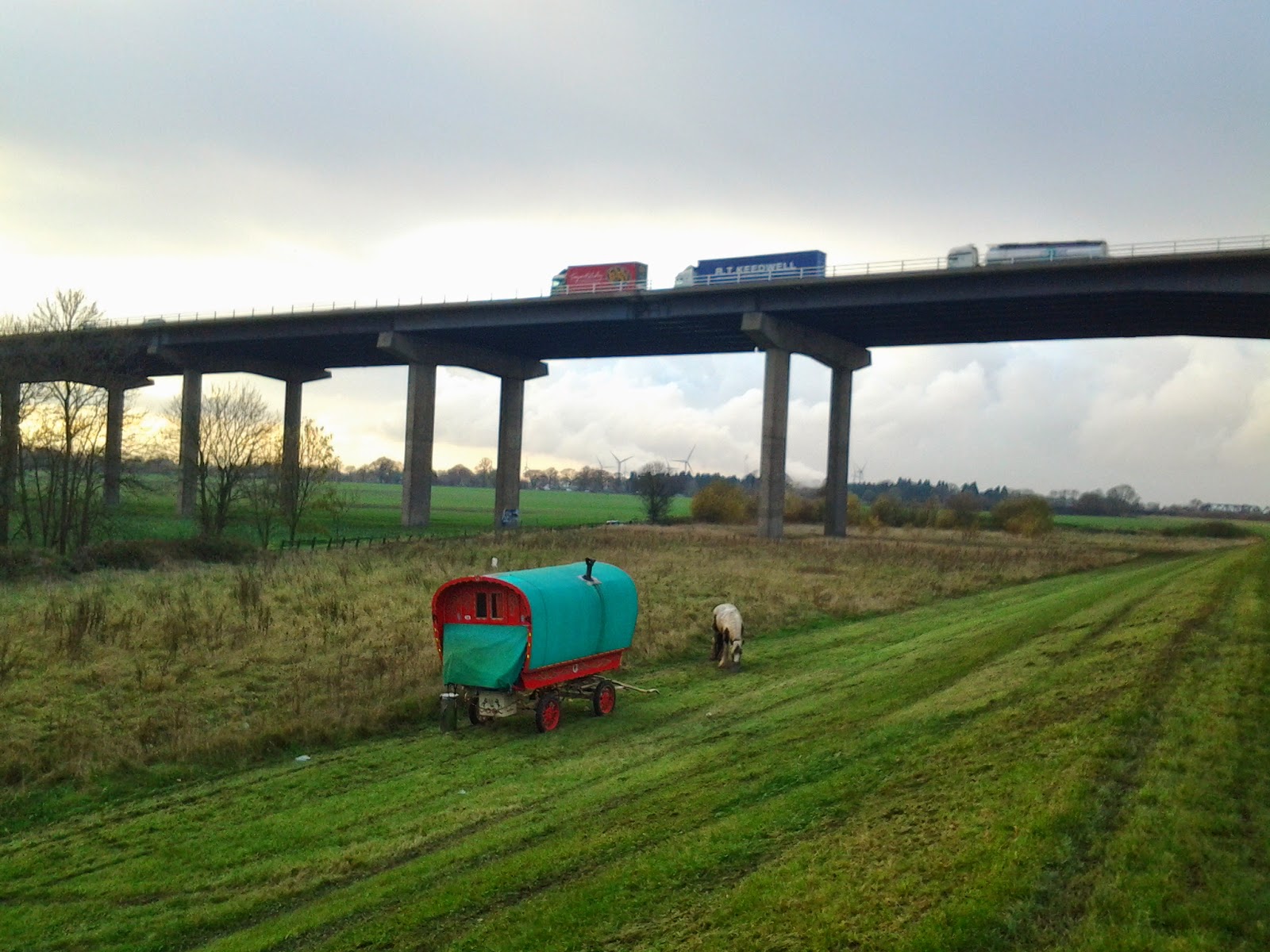 Back at M62 Goole 18th November 2014
I carried on up the Trent from Gainsborough. I stopped with Willy and Justine, nice horse people, l met them several years ago and l'm always glad to see them. Went up to Goole and stopped under the motorway again, l like stopping there. 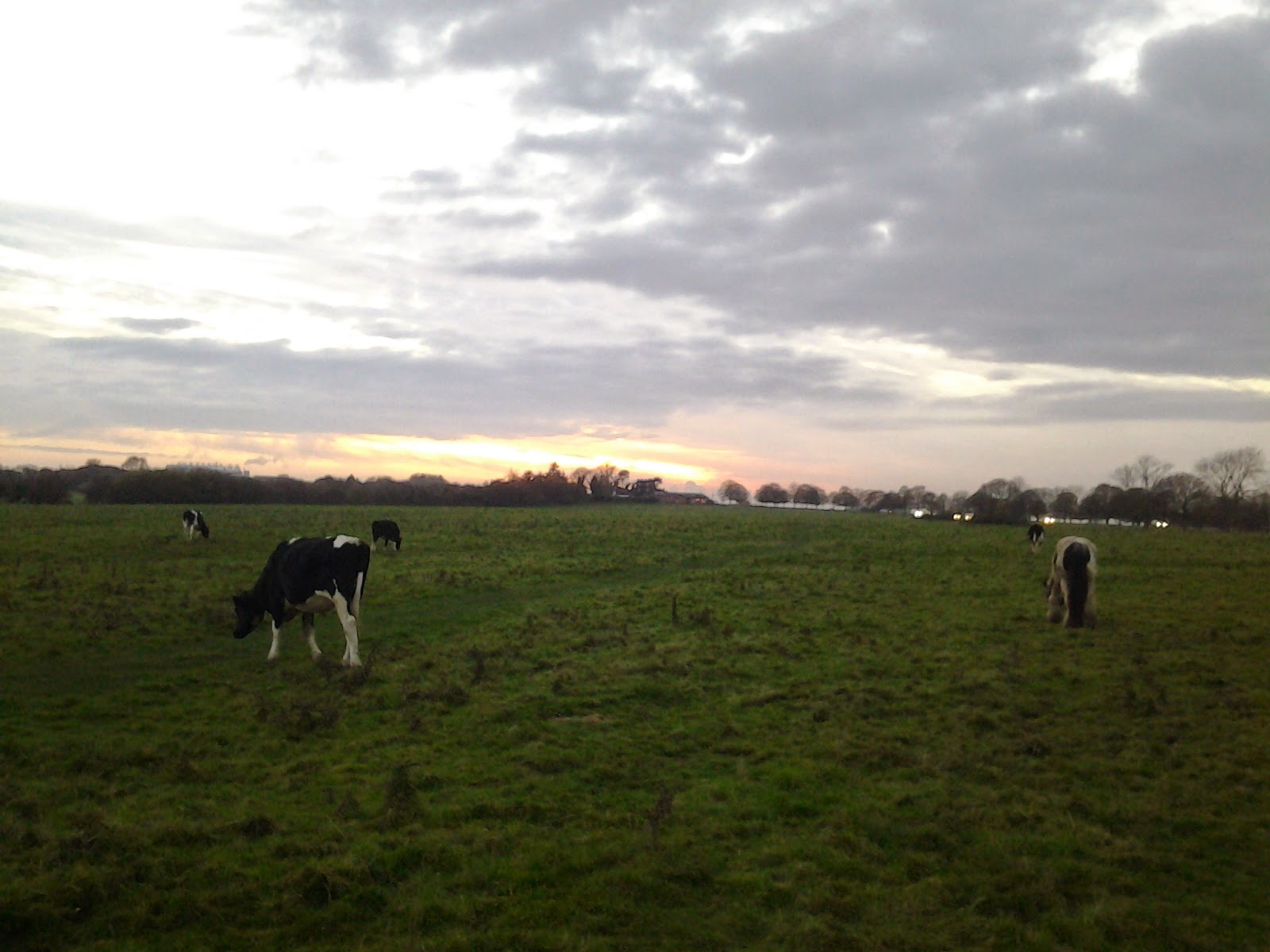 Sunset Beverley Common, 4.30pm
After Goole l headed east, it's not a part of the country l know so l thought l'd go and explore it. A retired traveller called Tom invited me to stop in his yard and put my horse in his paddock. He had a nice cob in a stable and was busy building a top on a dray, l was glad to meet him. If you travel by car you don't really meet anyone. Travelling by wagon you meet interesting people all the time. The next day l stopped on Beverley Common. I got there shortly before the sun was going down. A friendly lady came and chatted and we watched the sun setting. A man with a dog came over and rudely interrupted and told me l couldn't stop there, he didn't bother to introduce himself. I don't like people like this. I told him l was stopping to rest my horse. He declared l'd be gone within the hour and marched off! The lady was suprised by his rudeness. I'm habituated to it and don't take too much notice. Needless to say l stopped the night without any trouble. People sometimes think you can just be summarily moved on but you can't, they like to try and bully you and be important. Dog walkers often think commons and beauty spots are for their exclusive use as toilets for their dogs and are indignant when any one else uses them. I've no time for them. 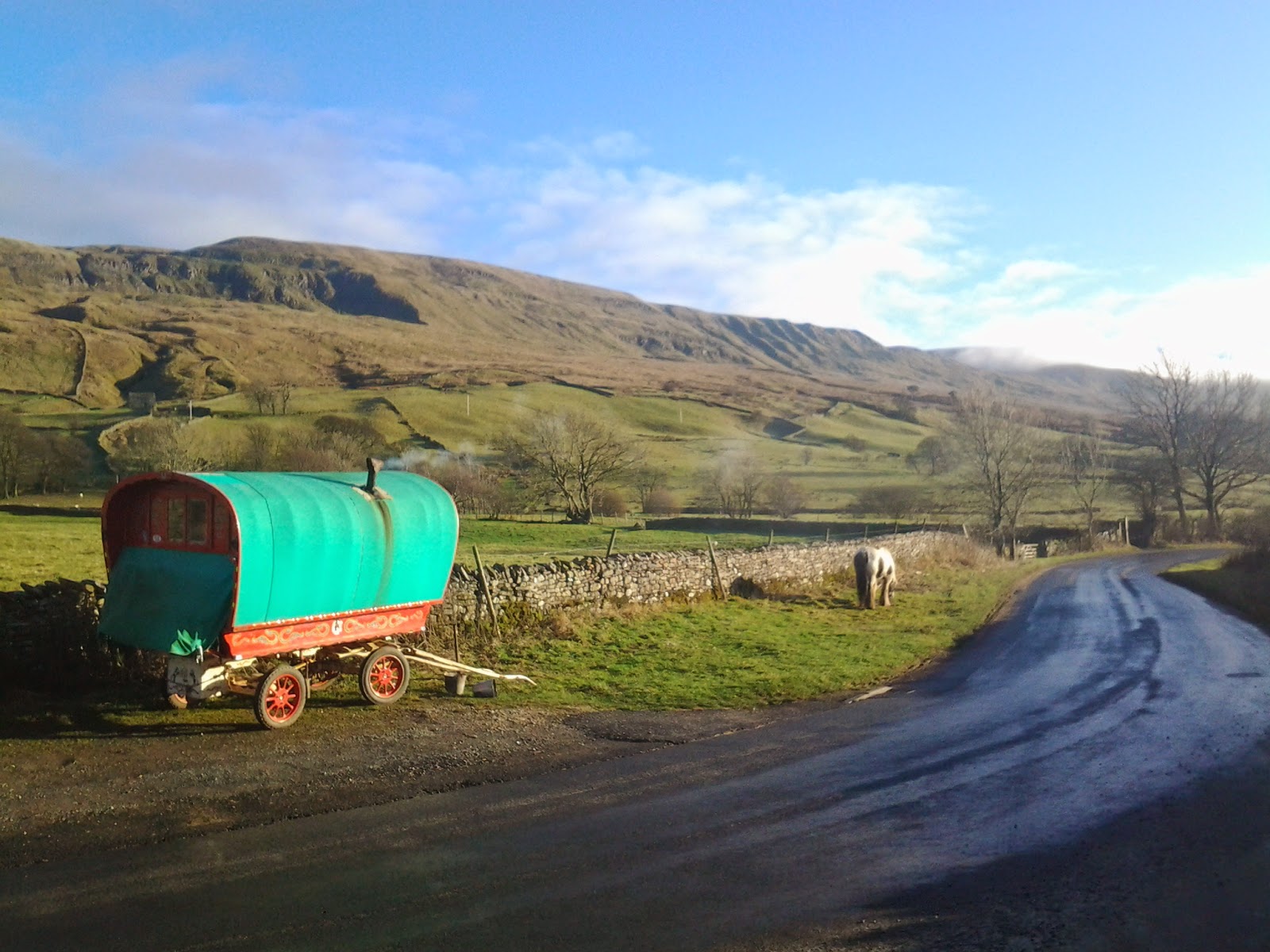 3rd Dec, 1pm, Pendragon Castle
I stopped with my friend Les, who makes a few wagons and trollies. It was good to see what he was doing and to share ideas. His wife cooked a nice meal and l used the washing machine and had a shower. The next day l went to Hornsea. The sea looked grey, cold and uninviting, l carried on.l stopped on a wide verge. In the night l woke up and heard a gentle sawing sound of fencewire moving backwards and forwards in the hedge. I knew what had happened and got up to have a look. Tarateeno had pushed through a gap in the hedge to eat the winter corn in the field, on his way back through the hedge he had got a piece of fencewire jammed between his hoof and shoe. In this situation it's difficult for a horse to understand what's the best thing to do. Many untrained horses will panic and injure themselves in this scenario. The horse's instincts are first to flee, if it can't flee then it will fight. In this case,  fight with the wire, this is how many horses get badly injured. The horse owner often gets injured too, a horse that is in the fight mode is very dangerous. I train my horses not to panic when they get their legs caught up. Once a horse is panicking it's difficult to help them. Tarateeno just stood patiently while I got my wire cutters and cut him free. In the morning l pulled off his shoe, got the remains of the wire out and nailed the shoe back on. I can't imagine travelling without having the skill and tools to be able to pull off and fix a shoe back on. 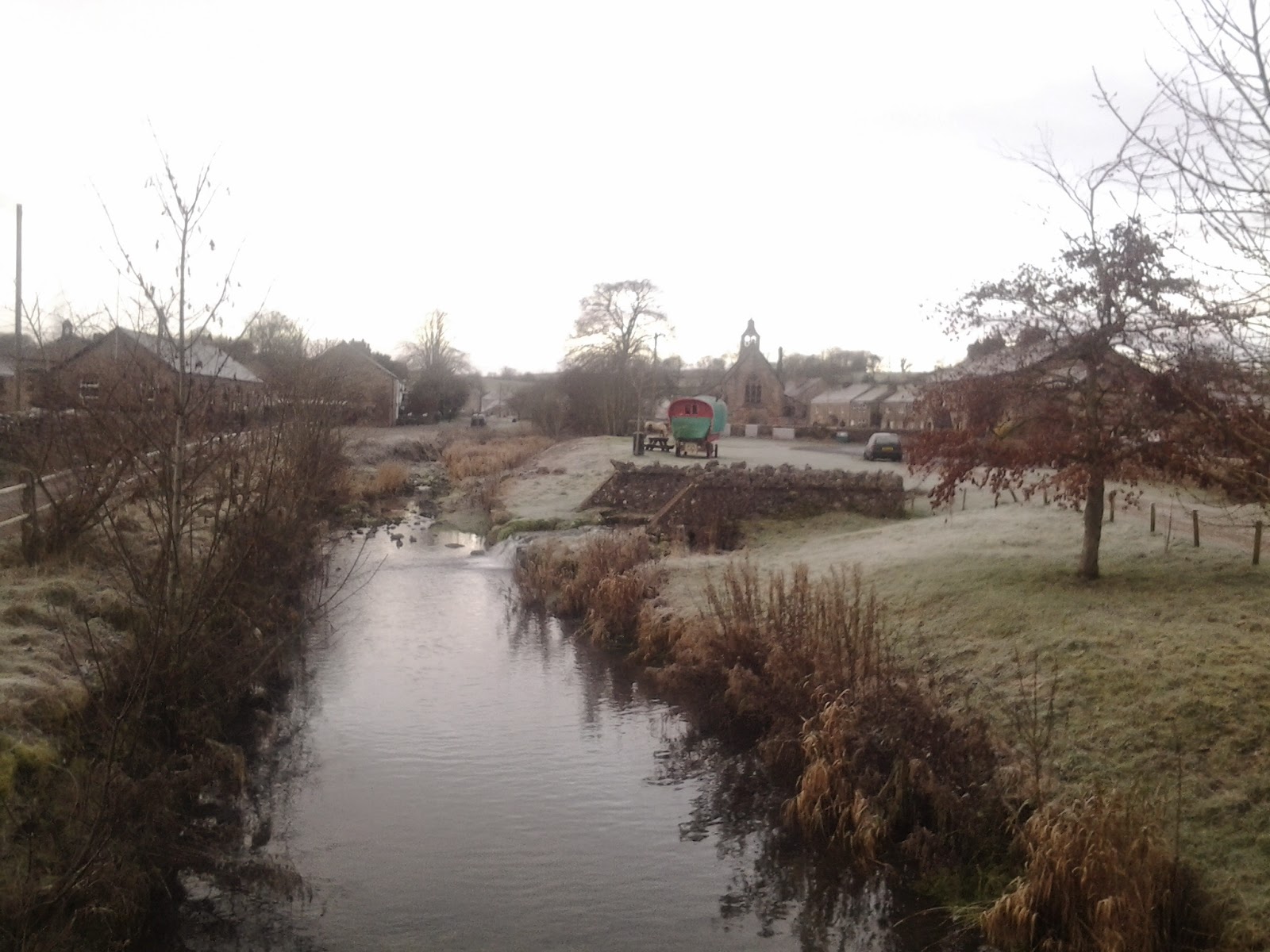 5th Dec, frosty morning, Great Asby.
By the 28th of November l'm back in the Yorkshire Dales, it's lovely to hear the curlews again. I go along Wensleydale, through Middleham and Bainbridge. At Hawes a kind lady brings me eggs, a loaf of bread, flapjacks, chocolat and a bale of hay. A retired couple bring some carrots for the horse and a chocolate bar for me. I'm pleased. It's getting colder. I go up to Garsdalehead and stop at the Moorcock Inn. It's bleak and beautiful, l give the horse the hay and I eat in the pub. There is a very hard frost and the next morning the road is slippery with ice. Tarateeno, with six tungsten studs [they're called crampons in French], in each shoe has plenty of grip. It's a beautiful still, sunny morning. This is one of my favourite stretches of road, down past Mallerstang to Kirkby Stephen, wild and dramatic countryside. At this time of year there is almost no traffic. Lovely. I stop the night by the rather romantic Pendragon Castle. I'm back in Cumbria.
I stop at Soulby then Great Asby. The frost in the mornings looks beautiful.
I go through Appleby and stop at Melmerby. During the night it snows a bit. 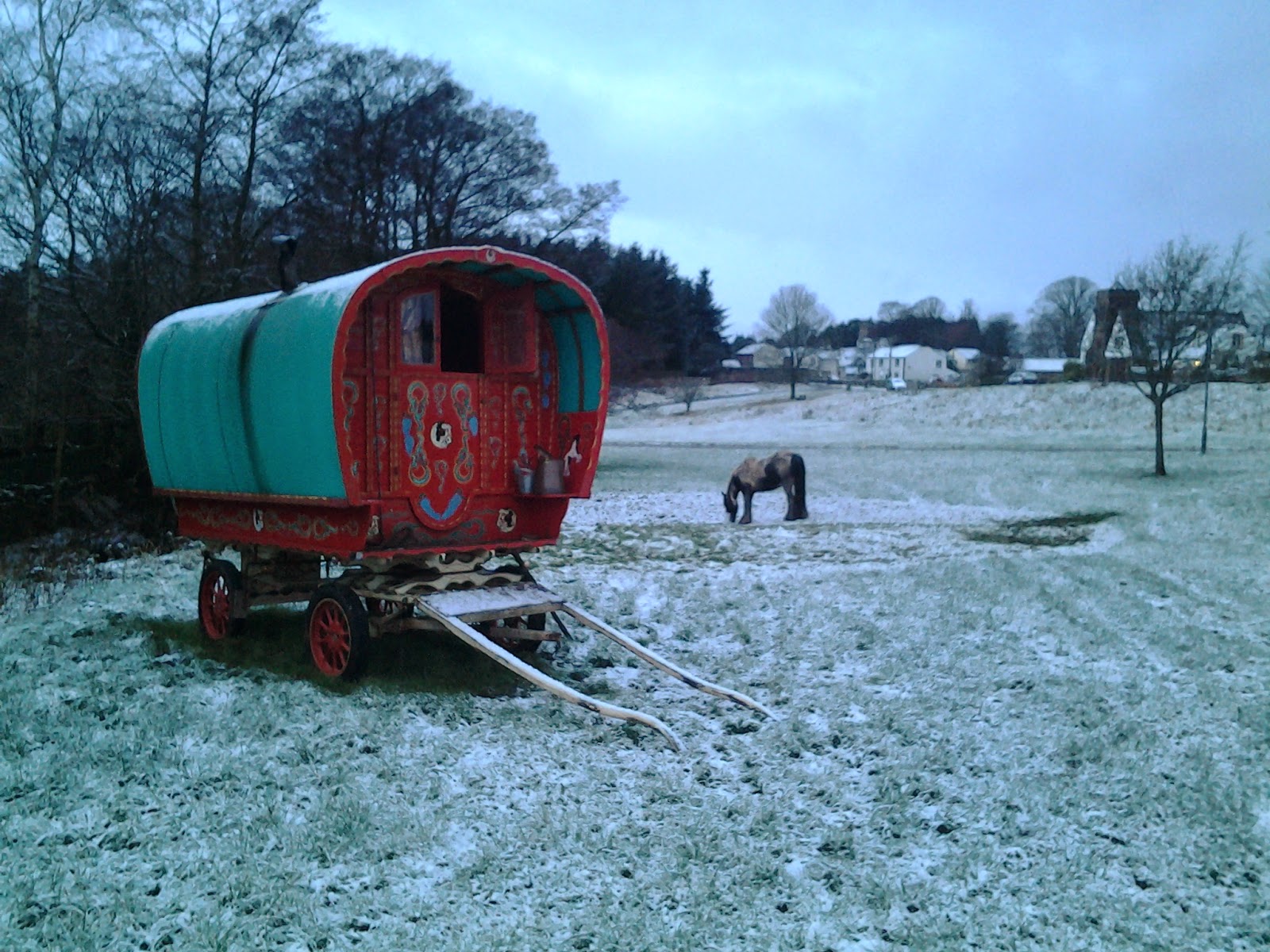 Melmerby, 8th Dec, a dusting of snow
There is an icy beauty to the countryside. I head over to Potters Lonin, the weather comes in bad and l stay there two days. The wagon is buffeted by icy squalls. Tarateeno has his rug on to keep the wind off. December the 11th, l make porridge on the stove, l put a potatoe in the embers to cook, then set off in the snow, it takes me 5 hours to do 11 miles, quite a journey, with lovely views of the snow covered mountains. On the way l stop and eat the hot potatoe, l'm glad of the warmth from it.I'm elated to get to Hesket Newmarket. The snow has not settled so there is grass for the horse. I eat at the pub. The same people are sitting at the bar that were there 18 months ago, they must have taken root. They're friendly, it's nice to hear their accents and enjoy their earthy humour. The next day it's a long climb up Caldbec Common, at the top l'm rewarded by great views across the Solway Firth of snow covered hills in Scotland. I stop a couple of days with Swanny and look at his horses. I'm glad to rest.
I get a couple of half worn shoes off Swanny. At Dearham l stop at a farm with Joe and Joan. I have known them for years and they are very kind. I re-shoe the horse. I borrow Joes welder and build up the worn shoes, they've done 650 miles. One of the shoes is too worn so l use one of the shoes from Swanny's horse. It is a bit too big so l cut the heels shorter, l use the old shoe as a pattern, while l'm trimming the hoof, my friend George comes round and shapes the shoe better, with a few blows of the hammer, l'm glad of his help and friendship. The shoes are soon back on and l'm ready to continue. I prefer to pay a farrier if l can but sometimes it's neccessary to do it myself as it can be very difficult to find one to do a good job. Most of the horses in this country are little more than garden ornaments and that's what the majority of farriers are used to shoeing. They don't want to mess around making shoes and putting 24 studs in! Many farriers are just interested in making money, they're not really interested in their job. They're no good to me and l'm no good to them. Luckily l know half a dozen really good farriers and go to them whenever l can. 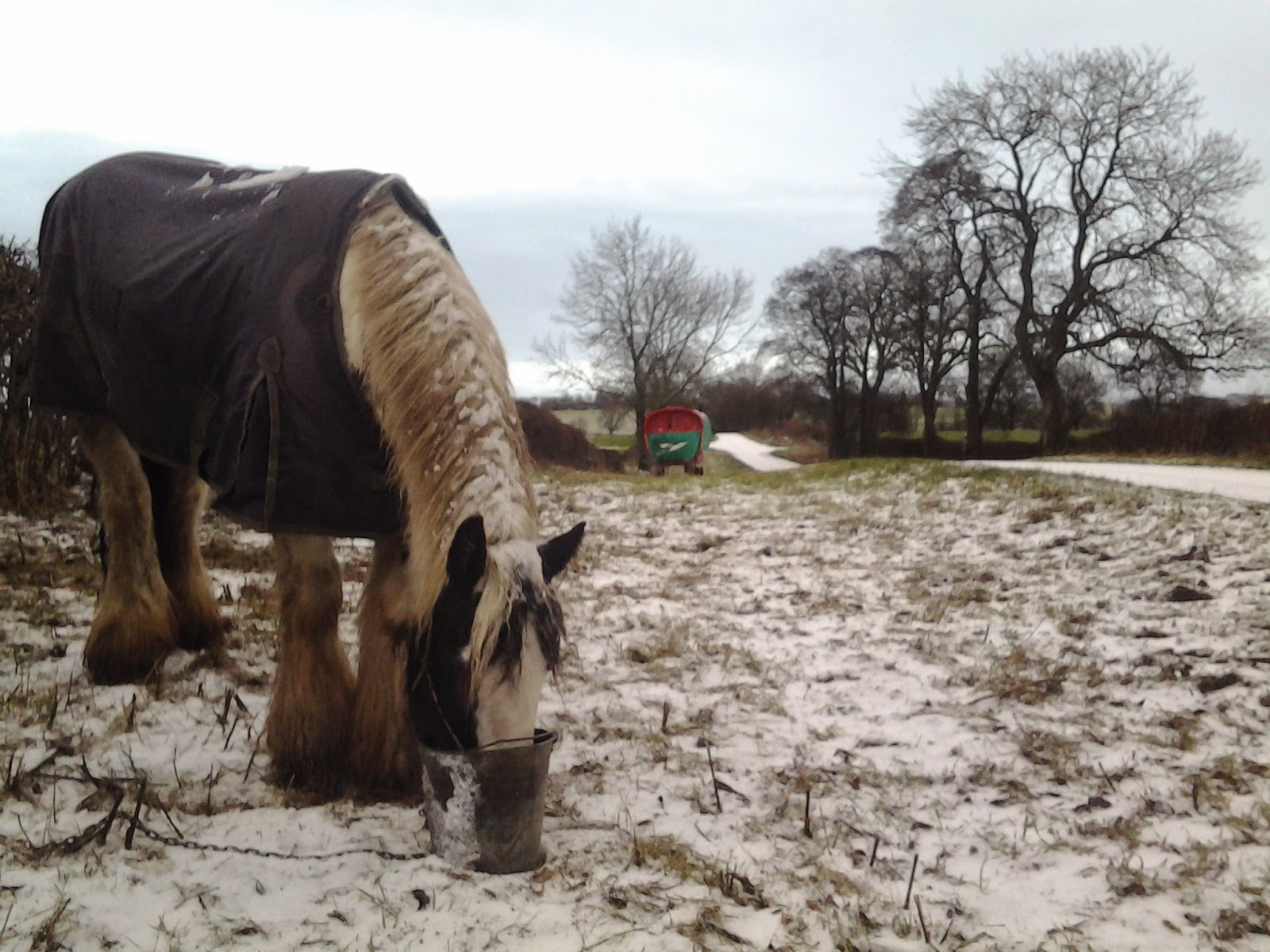 Potters Lonin, 9 am, 11th Dec
I carry on up the Solway, l stop on the green at Allonby, a gale is blowing, l go to sleep listening to the roar of the surf. In the morning Diane and Brian who live opposite invite me over for tea and toast. They've got their Christmas tree up. It's nice to see them. I carry on up to Silloth and stop with Rob in his yard and put Tarateeno in a stall. I use his battery charger to charge up my battery. Solar panels struggle at this time of year, there's little sun and it's at a very low angle. It's good to see Rob. He drives a wagon each year to Appleby, that's his holiday. I stop the next night at Whitrigg bridge near Kirkbride. Sometimes the tide comes right up over the grass here but l hope it'll be ok tonight. It's a lovely spot and thousands of migrating geese and hooper swans stop here. 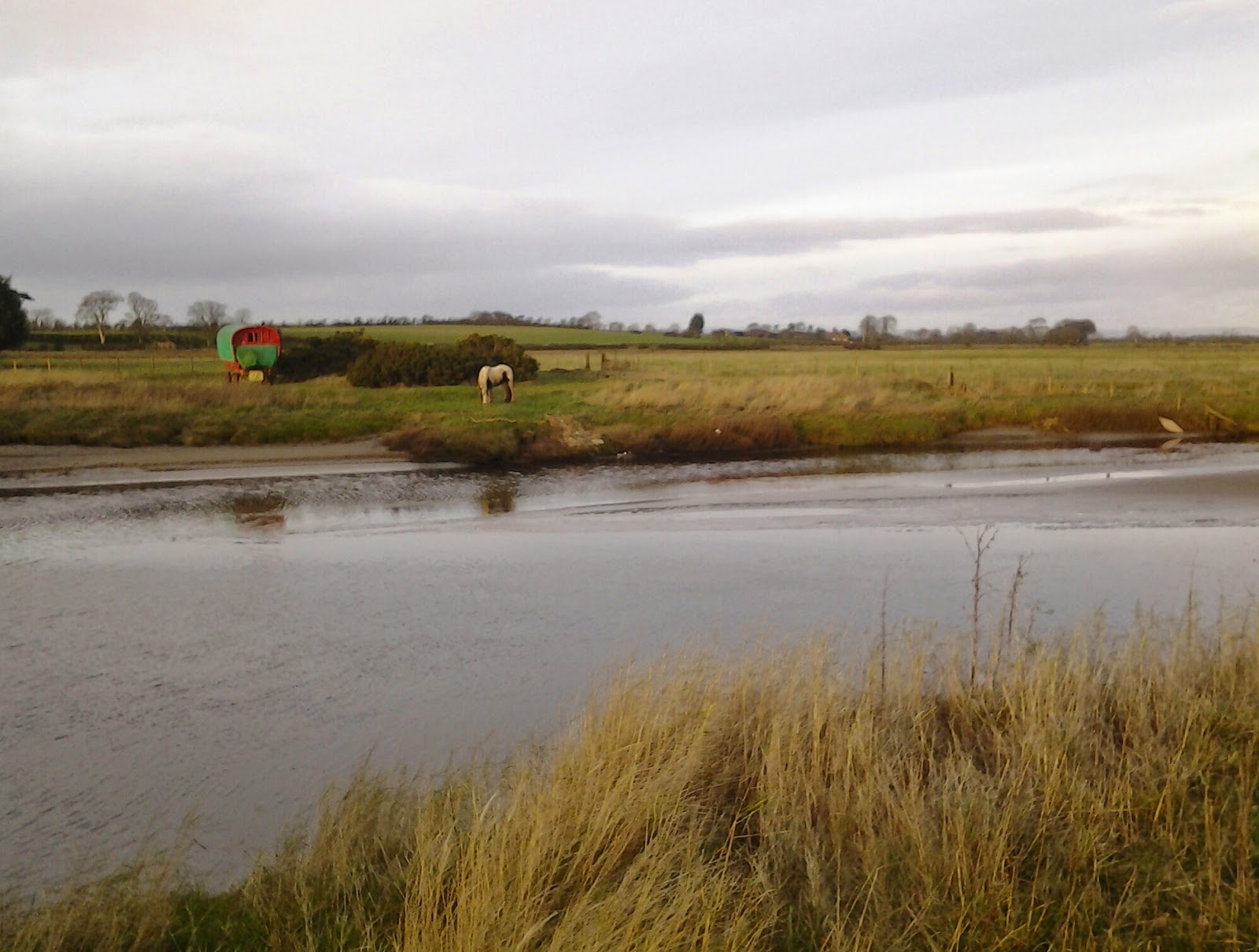 Posted by Horsedrawn travel at 19:57